A healthier twist on your typical jalapeno poppers recipe. Peppers are loaded with chicken, bacon, a little cheese and roasted in the air fryer to make a perfect appetizer or quick weeknight dinner.

Our jalapeno plants are full of bright green peppers in the garden right now. We’ve been enjoying them fresh and pickling some, but I needed to find an easy way to use them before they spoil.

One of my favorite foods to grill during summer are jalapeno poppers. Stuffed with cheese and wrapped in crispy bacon, what’s not to love?!

I knew I could make them quickly inside using the air fryer, but I also needed to make them a little healthier. I can easily eat several of these at one time, and when you start adding cheese and a whole slice of bacon to each popper, the calories really add up quickly.

This recipe for air fryer jalapeno poppers has a few twists to make them healthier and more filling without sacrificing taste. Instead of wrapping in bacon, you’re going to put small bits of bacon and add chicken to the cream cheese filling. Adding chicken is a game changer since it increases the protein and makes these poppers more filling.

Affiliate disclosure: This post contains affiliate links. As an Amazon Associate, this means I earn a small commission if you choose to purchase through my links. This is at no extra cost to you!

(Full list of ingredients with measurements and full instructions can be found in recipe card below.)

Before you start assembling your peppers, you’re going to need to do some prep work.

First, you need to cook your bacon. You can cook the entire slice of bacon and then crumble it, or you can cut it up into small pieces first. Fry in a skillet over medium heat until nice and crispy.

You can also cook everything in the air fryer. Instead of cutting into pieces and then cooking, just cook the bacon slice and chicken whole and then dice them up into small pieces. This is a great way to avoid dirtying another dish!

Do you need a new air fryer? Read about my favorite 6 quart air fryer here!

While the bacon is cooking, take and cut your chicken breast into pieces small enough to fit inside half of the jalapeno. Season with salt, pepper, and garlic powder – or whatever seasoning blend you like on BBQ.

Once the bacon is done cooking, remove from the skillet and set to the side. Using the bacon grease, cook your chicken pieces in the same skillet (or if you’re not using a skillet, cook in the air fryer). You will continue cooking the stuffed jalapenos in the air fryer so don’t overcook the chicken at this stage.

While the chicken is cooking, I usually prepare the jalapenos. Cut off the stems and slice jalapeno peppers in half long ways. Clean seeds out by rinsing under cool water, or if you prefer really spicy peppers, you could leave a few seeds in.

In a medium bowl, combine cream cheese and shredded cheese. Toss in the crumbled bacon, and cooked chicken breast pieces. Mix everything together.

Now take a jalapeno half and fill it with a scoop of filling. Continue until all peppers are stuffed.

Place peppers in the air fryer basket in a single layer. Cook on 400 degrees f for 8 minutes, or until the cheese mixture is bubbly and golden brown.

Store any leftovers in an airtight container in the fridge.

I’ve found these air fryer jalapeno poppers to be a great option for a low carb party appetizer, a great snack for game day, or even for dinner with some roasted veggie sides.

This one is going on the list of my favorite air fryer recipes!

What other peppers can I use for air fryer jalapeno poppers?

Don’t have an air fryer?

That’s okay! Just follow my steps over for cooking the bacon and chicken in a skillet. You can either grill or place on a baking sheet and cook in the oven until the cheese stuffing is golden brown on top. 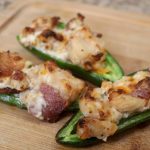 This recipe is made healthier by reducing the amount of cheese and bacon used and adding chicken breast to the cream cheese filling.
Prep Time 20 minutes
Cook Time 8 minutes
Servings 20 peppers

Pin this for later!

Here are some more great recipes you may be interested in!

Leftover Pot Pie with Biscuits Recipe – Clean Out The Fridge

I'm Haley - a stay-at-home wife, and a homeschooling momma to two boys. I'm a born and raised Texas girl who has a love for simple living and making our home a peaceful place for our family to gather. Read More…